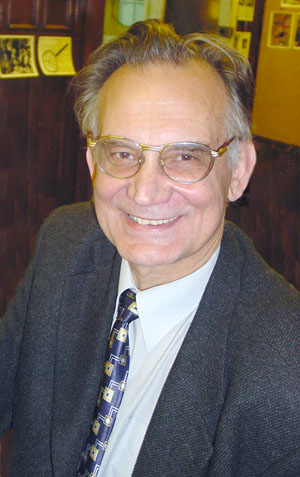 By publishing this special issue, we celebrate simultaneously two jubilees: the 70th birthday of Professor Oleg A. Petrii, who is now Head of the Department of Electrochemistry at Moscow State University, and the 50th anniversary of Oleg’s scientific activities that have started while he was still a student. His first paper, published in 1958, was submitted in 1957. Nobody who knows Oleg Petrii would ever have any doubts of his electrochemical erudition. He is an international celebrity and admired for his uniquely friendly style of communication. His approximately 350 papers in refereed journals, 8 textbooks, 18 monographic chapters, and 12 reviews in periodicals make hima true electrochemical classic.He has supervised 40 Ph.D. students and was the host of numerous research visitors from various countries. Oleg is a very unpretentious person, and therefore, we do not want to write a too ceremonial and formal review of his achievements but instead straight away discuss what he has given to the scientific community during the various stages of his scientific career.

All his publications are electrochemically oriented; however, they cover several different topics, and sometimes they are related to other disciplines, like material science, physics, power and chemical engineering, and even environmental chemistry. Thus, it is difficult to group his papers according to their content, as frequently, one and the same paper is related to different fields of research. Nevertheless, for a clearer presentation of his achievements, such classification is justified and helpful. One can mark out at least four general fields of Petrii’s activities. They are listed in this paper in more or less chronological sequence.

Because of his work, a more profound understanding of several model reactions was elaborated. Especially his work on the electrode reactions of several anions should be mentioned. Using the Frumkin approach, he could qualitatively explain important effects, e.g., the decrease of current with overvoltage. In recent years Oleg Petrii and his associates investigated the role of different molecular parameters, which affect the kinetics of electrode reactions of various complex species. The role of atomic charge distribution and non-spherical shape of reactants, the presence of supporting cations, and ionic association were better understood, in particular, in terms of preferential reactant orientation in the reaction layer. In addition to some model reactions, more complex electrode reactions were investigated as well. These studies are important not only for the progress of electrochemical kinetics but also exert an impact on the understanding of charge (electron) transport in more complex environments, including biological systems.

Electrocatalysis
In 1965, Petrii’s paper on the anomalously high electrocatalytic activity of electrodeposited Pt–Ru was one of three pioneering publications that have built up the basis for a long and still continuing mainstream research. His subsequent Pt–Ru studies of 1966–1969 are still very beneficial for people interested in such important details like Pt–Ru potential of zero free charge, the high activity of pure Ru at elevated temperatures, and the analysis of oxidation products of various organic fuels.

Also, in this field, we should point at some other important papers of Oleg Petrii, for instance, those that deal with adsorption and oxidation of compounds that may be potentially used in fuel cells, as for instance, in the methanol fuel cells. The kinetic peculiarities of methanol oxidation on platinum, including the role of dissociative adsorption and chemical interaction in the adlayer, were already well understood by him in 1965. Oleg also published important papers on hydrogen electrode reactions at various electrodes. These reactions are of primary interest for both fuel cell technology and industrial electrolysis. The importance of these papers is even increasing in recent years, as hydrogen power engineering is in the center of scientific attention. From this point of view, Oleg Petrii’s work related to hydrogen sorption by metals and alloys is of lasting significance.

Surface thermodynamics of the perfectly polarizable electrode
This is probably the most spacious, the most deep-going, and simultaneously, the most complex field of Petrii’s research. In his D.Sc. thesis (1970), he found a way to do a general treatment of the numerous experimental data on platinum metals obtained by original and very sophisticated techniques. The resulting findings related to total and free charge has been later reviewed jointly with Frumkin. Frumkin and Petrii proposed a systematic approach to the verification of various thermodynamic relationships for hydrogen adsorbing electrodes, and Petrii arranged a set of very specific and elegant experimental techniques to separately measure differential quantities and to measure directly the Gibbs surface excess of ions. The most basic electrochemical notions, like potentials of total and free zero charge, and the correct thermodynamic understanding of the metal–adsorbate charge transfer grew from these studies.

Electrochemical material science
Starting in the mid-1970s, Oleg Petrii initiated consistent studies of non-noble electrode materials (carbides, oxides, hydride-forming alloys, amorphous, and ion-implanted metals, conducting polymers, nanoscale composite materials). His great experience in surface thermodynamics and electrocatalysis made it possible to discover basic phenomena governing the behavior of these complex systems. However, the platinum group metals continued to attract his permanent interest, especially in the context of underpotential deposition of foreign metals and, later, template nanostructuring for improving electrocatalysis and hydrogen sorption. It is difficult to remember a type of modified electrode he missed to study.

The achievements of Oleg Petrii in this field are partly related to modified electrodes, which are in a rapid development. These studies were mostly focused on the electrocatalytic phenomena, but the possibility of some other applications is also quite evident. From another side, the electrodes prepared by deposition of various substances on conducting supports, in particular, templated deposits, were studied by him intensively and systematically.

There are also some papers that are more outside the above-mentioned classes of his research activities: Among them, we should mention current transients at the growing mercury drop, nitrate reduction on platinum (inducing more and more interest in the community), two pathways of peroxodisulfate reduction on catalytically active metals, urea coadsorption with CO (a rare example of an ‘reversible’ organic adsorbate on Pt), electrochemistry of high temperature superconductors, and various versions of nanoelectrochemistry (starting from the electrochemistry of ultra thin films as early as in 1970s!).

Oleg Petrii has a lot of obligations and duties in Russian and various international scientific committees, and we avoid presenting a list of all his positions. We only would like to mention that he is a member of the Editorial Board of the Journal of Solid State Electrochemistry starting from the very beginning, and thus, it is our pleasure to honor him with this special issue.

Finally, we would like to disclose in this paper some secrets: The first secret is that, starting from his scientific youth, Oleg Petrii showed extraordinary glass-blowing abilities. He can solder extremely thin capillaries and repair any glass cell himself, usually better than any professional glass blower. Another secret is that he is a gifted singer, on his own or jointly with his closest friend, Professor Boris Damaskin. He also likes to compose songs and to stimulate a relaxing social life at the Department. Probably the most known piece of art that he has created with assistance of his student Rein Marvet is a portrait of Frumkin painted in the style of Picasso and consisting of various classical electrochemical curves. Oleg is also an enthusiastic swimmer, and his participation in various scientific meetings was also stimulated by the wish to swim in all seas and oceans of the world. He is still waiting for a swim at the coast of Australia and the Antarctic. Perhaps, this wish might prompt the International Society of Electrochemistry to consider organizing meetings at these locations?

Finally, Petrii is a flesh of Frumkin’s school, and it is more than symbolic that he is working now in Frumkin’s former office, using Frumkin’s historic bureau, and sitting on Frumkin’s original chair. He creatively continues to apply Frumkin’s approaches to various problems of modern electrochemistry. These applications are always illuminated with Petrii’s ingenious creativity and optimistic foresight, a solid guarantee of the sequential development of the famous Frumkin school.

We wish Oleg Petrii to keep his elating spirit for many years to come, to be surrounded (as always) by faithful pupils and coworkers, and to overcome the problems with his usual ease resulting from his breadth of mind and views in combination with strong but well-wishing temper. We surely wish him health and many sunny days.