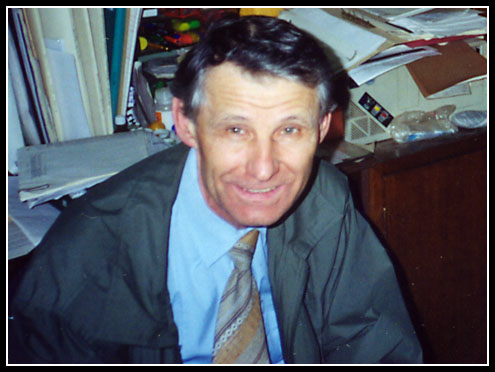 Alexander M. Kuznetsov (Jan 5, 1938 – Feb 13, 2009) was a bright scientist of uniquely wide professional and humanistic view. Uniquely educated and friendly person, he was a real centrum of mixed community at the edge of chemical physics and physical chemistry, widely known as simply Sasha (diminutive first name he always prefered).

Sasha Kuznetsov entered a famous Theoretical Department of the Institute of Electrochemistry AN USSR in 1961, and joined Prof. R.R.Dogonadze group, They pioneered the quantum mechanical theory of electron transfer in solutions, which now became a general theory of in chemical, electrochemical and biological systems. Having been started from a junior researcher he became a head of theoretical department (1986-2004) and principal researcher (at present). In 1971 he became a D.Sc. at the Institute of Electrochemistry (Dissertation: A theory of charge transfer in polar media). He was a visiting scientist at the Technical University of Denmark, Chemistry Department A (c.o. Prof. J.Ulstrup), Visiting Professor at Purdue University, IN, USA, School of Science and Chemistry Department (c.o. Prof. K. Kliewer and Prof. M. Weaver), Guest Professor at Forschungszentrum Julich GMBH Institut fur Energieferfahrens-technik (c.o. Prof. U. Stimming and Prof. A.A.Kornyshev), Guest Professor at Ecole Politechnique Federale de Lausanne (c/o Prof. H. Girault), Invited Professor at Ulm University, Germany (c.o. Prof. W. Schmickler), Leverhulme Visiting Professor at Imperial College London (c.o. Prof. A.A.Kornyshev).

A.M. Kuznetsov is an outstanding scientist in physical chemistry and electrochemistry widely recognized by the international scientific community. He is a member of Editorial Boards of a number of International Journals, a foreign member of Royal Danish Academy of Sciences (since 1994).

A.M. Kuznetsov’s research is documented in about 365 international refereed research articles, a number of refereed review articles, and four monographs. He has contributed broadly to the theory of chemical, electrochemical, biochemical, and optical processes in condensed media. Among his main achievements are: comprehensive quantum mechanical theory of electron transfer in bulk solutions and at the electrodes, including both thermal and optical processes, in particular in bacterial photosynthesis, and the theory of proton transfer, in particular, in hydrogen evolution reactions at metal electrodes. The model suggested in these works in late 60s of the last century was used as a basis in all further developments of the theory of proton transfer processes. Some of his works (made in close collaboration with his colleagues from Russia and other countries) were ahead of their time. This concerns first of all so-called bridge assisted electron transfer reactions which became a hot topic of studies during the last two decades. He did not restrict himself by the development of the known fields of research, but also looked for new effects in electrochemical systems. His talks at the ISE meetings inevitably attracted a great interest of participants.

In particular, he predicted a possibility of the single-electron transitions in electrochemical reactions at room temperature (with J. Ulstrup), suggested a method of through-metal scanning reaction microscopy of the electrode surfaces, created the first quantum mechanical theory of electron transfer at superconducting electrodes and predicted tunneling of Cooper pairs. In one of his recent works he suggested a theory of the effect of internal conversion of vibrational quanta in inelastic electron tunneling and method of experimental observation of this effect.

Since 1992 A.M. Kuznetsov devoted much attention to the theoretical study of electron tunneling in in situ tunnel contacts. He (with J. Ulstrup) predicted a phenomenon which at present is called redox-mediated electron tunneling. To a great extent due to his works (in close collaboration with J. Ulstrup) the first consistent theory of this phenomenon was developed and its physical mechanism was revealed (2000). It turned out that the system involving two metal electrodes in the electrolyte solution and a redox group confined in the tunnel gap between them suggests a variety of physical situations differing by the strength of coupling of the redox group with the electrodes. In the case of weak coupling electron transfer has a sequential step-wise character involving reduction/oxidation of the redox group with full relaxation of the medium polarization in each step.

A new phenomenon in electron tunneling was predicted theoretically in the case of strong coupling, viz. the transfer of a large amount of electrons via the electron state of the redox group in each reduction and each oxidation step. It was also found that the dependence of the tunnel current on the overpotential has a spectroscopic feature with a maximum in the vicinity of equilibrium potential of the redox group. All these predictions were confirmed experimentally.

Concludingly A.M. Kuznetsov is one of the pioneers and creators of quantum mechanical theory of charge transfer processes in condensed media. He has contributed broadly and significantly to various areas of the field. The contributions of A.M. Kuznetsov (and his collaborators and students) to the single-molecule and single-electron processes in electrochemical systems over the last decade or more have been highly innovative and provided new results towards the nano- and molecular-scale levels. He would therefore be a worthy recipient of the Frumkin Memorial Medal of the International Society of Electrochemistry.